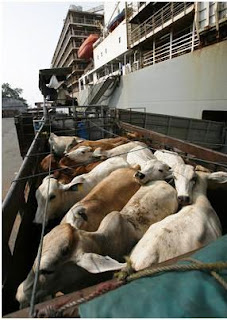 At the last Bluestocking Discussion Group we explored the recent events surrounding live cow export to Indonesia. Video footage by Animals Australia depicting cruelty against cows in Indonesian abattoirs has raised concerns about Australia’s live animal export practices, and led to a temporary ban on the trade. As we discussed last Sunday, this raises interesting and tricky questions about the ethics of live animal export, about the responsibility we should or shouldn’t have over the end use of “goods” we sell (eg uranium, animals), and about the future sustainability of the way we live and eat.

The Australian cattle industry and farmers, the Indonesian meat industry and consumers, the Australian government, and Australian public, all appear to have a stake in the future of live cow export. The media reports in Australia over the last month seem to have been dominated by the concerns of the Australian farmers; primarily, the frustration of farmers with the uncertainty surrounding their industry. Whilst the ban on live exports has since been lifted, there are now strict conditions over the exportation of cows to Indonesia. It is the Australian exporter who is now required to account for each cow that is transported to Indonesia- from the moment they buy the cow in Australia, to the moment it is killed in the abattoir in Indonesia. This can be a process which takes several months, as the Indonesian government is trying to enhance its own livestock-feed industry by “fattening-up” the cows in their own fields, before slaughter.

We discussed the question of whether it is simply easiest, and more humane, to stop live export of the cows altogether. There are a few reasons why this would be tricky: one reason is the livestock-feed industry that Indonesia wants to continue to build; another reason is the halal standards that Indonesia wants to ensure are met; another reason is the lack of refrigeration in much of Indonesia, making fresh meat the safest choice. In terms of the Islamic halal standards, we do have halal butchers in Australia, but there is some difference of opinions over whether stunning is acceptable under halal guidelines. In order for meat to be halal the cow must be killed in a specific way. In Australia, nonlethal stunning before proper slaughter is accepted as halal. This practice is not universally accepted, however, and hence international standards do not include stunning. The Australian government requires exporters to ensure that Indonesian abattoirs are up to international standards for cow slaughter. Unsurprising, this has not been deemed sufficient by animal welfare groups.

Finally, our discussion led us to question the animal welfare standards in domestic industries here in Australia. While the plight of cows and sheep abroad is most certainly an area of concern, it can be seen as hypocritical to chastise Indonesia for its bad animal welfare record when caged chicken (among other issues) are still a legal industry in Australia. Hopefully the live cow export media blitz will help to raise community awareness of the animal welfare problems we have here at home.

For further information on any of the above, post up a blog with your questions and I’ll do my best to research an answer. Some interesting sources are pasted below.

The Photo above is courtesy of tha abc news.