The Bluestocking-affiliated Practical Ethics group took its first official Freegan run this weekend, with five participants, one who claimed to be "just an observer", although we quickly press-ganged him into use as a bag-passer, vegetable-holder, and dumpster-lid-returner. As lovely little Freegans, we returned everything to a tidy state, lowering dumpster lids, redistributing the cardboard boxes on top, and snacking on scones straight out of the bag. Well, ok, straight out of the bin liner. 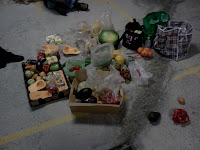 Our haul amounted to mostly fresh produce from a Sunday market, pretty much all bruised, starting to go off, or otherwise "damaged goods". We liked them perfectly fine, however, and anything that was too far gone even to be reclaimed by hungry hungry hippies went to a separate box for the chooks. 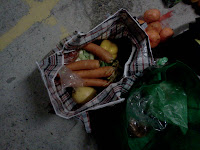 Although we weren't as green as we would have liked (in that we had a car and drove from site to site), it turned out to be essential for the sheer amount of stuff we had, most of which we sorted into cardboard flats also taken from the dumpster. We had all thoughtfully brought lots of those little fruit and veg bags for putting loose rolls and things in, which turned out nicely when we hit the jackpot of scones, chocolate croissants, and walnut scrolls. Also as individual bread bags for the wholemeal loves we found, baked fresh that day.
So after sorting out the bounty, I took my share home and washed it thoroughly in cold water and soap (I actually used dish detergent, with a thorough rinsing to ensure it was all off every veggie), then patted it dry and put it in the fridge for later use -- it was about 11:15 when I got home, and about ten to midnight when I finished washing vegetables.
Today, this is what I made from it (and ingredients I had around the house): 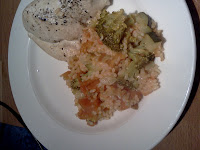 Vegetarian baked risotto, based on this recipe -- I already had the garlic, onions, oil, rice, broccoli and the extra sprinkling of parmesan I added -- the zucchini and tomatos came from freeganism. 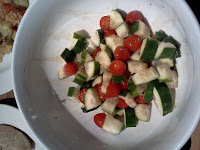 Just a light salad: cherry tomatoes and cucumber from the dumpsters, lemon juice from our backyard tree, a splash of balsamic vinegar and salt to taste. 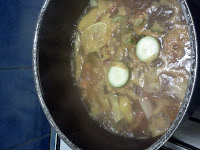 And a lot of other stuff -- a yellow capsicum, a carrot, and a lot of other odds and ends, including the rest of the stewed tomatoes from the risotto -- went into a pot with some water to simmer away into vegetable stock.
I have also been cultivating my own sourdough starter from wholegrain flour and water, and set that out to rise while I cooked all of this -- it's slowly poufing itself into a little round ball right now.