From now on all Bluestocking Institute blog posts will appear on www.bluestockinginstitute.org.  Check there for the latest news and information.
Posted by Shae at 5:23 AM No comments:

Graeber’s book provides an enlightening 5000 year history of ‘economy’, using the concept of debt to help illustrate the ways that global and local economies have been shaped by historical factors. The underlying theme of his book, I believe, is not strictly ‘debt’, but is the way that ‘human economies’ have turned into ‘market economies’ and the social upheaval and social disconnect that this has caused us. Debt is one, albeit prominent and influential, example of this.

Originally, Graeber argues, most communities were founded on ‘human economies’, where the primary economic activity was a form of ‘communism’ between family and friends (ie to each according to their need, from each according to their ability), and where human life was of ultimate value. (One of the next books we're looking at, Humanizing the Economy: Co-operatives in the Age of Capital by John Restakis, opens with a similar overview). The economic activities of ‘exchange’ (between strangers) and ‘hierarchy’ (between unequals) were secondary. Through various examples, Graeber shows how war and slavery, propagated by kings/governments throughout written history, has been a catalyst for economic change around the world.

As armies grew in scale and organisation, it became necessary to find ways to pay soldiers over campaigns that might last for months or years. With the coming of soldiers and their coins into small communities, ‘exchange’ and the quantification of objects of value, slowly became the economic norm. Slavery (which accompanies war), simultaneously allowed for the quantification of human life (which was unthinkable in a ‘human economy’), and together these forces paved the way for market economies to grow. Within these new and emerging market economies, social relations are increasingly quantified, and thus stripped of their true value. It is within this context that ‘debt’ (a market economy exchange activity where obligation is quantified) became a central tool through which the powerful could exert control over people.

Graeber goes on to explore how debt has been periodically enforced and then relieved, by kings, governments and religious authorities, in response to historical processes. The forgiving of debts, or the inclusion of mechanisms which prevented debts from becoming impossible to repay, was important to continued functioning of society. (On this note, it's interesting to read more about the Islamic conception of debt.)Throughout these periods of great empire decline and ascendance debt, as a tool of control, has been slowly infused into our economies, written into our laws, and even embedded into our moral and religious values.

Debt: The first 5,000 years is a book that's clearly meant to be linked to, and help to support, political action to create structural change. Aaron Bady discusses, for example, the connection between Debt and the Occupy Wall Street movement, while Miranda Joseph argues that Graeber's focus primarily on 'the violence of abstraction' has the potential to undermine a 'movement of the 99%' which recognises differences and inequalities within the movement. Meanwhile, the Rolling Jubilee project, which initially attempted to buy and forgive debts (partly as a way to start conversations around indebtedness), is now working to organise debtors and change the economic system.

Graeber ends the book by looking at the latest incarnation of the market economy and the use of debt in today’s capitalist economic system, the aspects of his work that draw most clearly on his involvement in Occupy and other movements. By putting our current economic crises into historical perspective, Graeber makes us think twice about the apparent omnipotence of capitalism, and helps us to question the role of debt, and indeed the market economy itself, in our lives and our future.

by Michelle Hackett and Sky Croeser
Posted by sky at 7:07 AM No comments:


Here's a call to get involved, from the organisers of the 2014 Upcycle Exhibition and Sustainability Fair, presented in association with the Perth Fringe Festival.


Beyond recycling, Upcycling takes discarded resources and reincarnates them as tomorrow's treasures.

We are currently inviting:

Exhibitors: whether you are an established artist, hobby recycler or absolute beginner keen to try repurposing, we'd love to see your creations.

Stallholders: including handmade, vintage or upcycled  products, along with food and information stalls related to sustainability

Visitors:  join us at Earthwise in Subiaco from 2pm on 22 or 23 February 2013 for this FREE event for the whole family.

Please do forward this information to any creative / sustainability folk who may be interested!

If you'd like more information, please see www.upcycleexhibition.org for event information or to express interest. You can also join us on Facebook and check out new Upcycling examples daily!
Posted by Shae at 4:23 AM No comments:

Review of 'The Spirit Level: Why Equality is Better for Everyone' by Richard Wilkinson and Kate Pickett (2009, Bloomsbury Press)

In The Spirit Level epidemiologists Richard Wilkinson and Kate Pickett argue that more equal societies are better off than less equal societies, with reference to a battery of evidence. Compiling data taken from a range of sources, including the World Health Organization, the World Bank and the United Nations, they document the relationship across countries between equality and social outcomes, highlighting the correlation between inequality and a range of social ills, including violent crime, obesity, and mental health illness. Recognising that such relationships could be spurious, the authors examined comparable data for the fifty states of the US to test whether inequality was related to various social problems across the two settings. This yielded the same findings, namely that the lives of individuals in less equal societies are unhappier and unhealthier. They note that while the increased prevalence of poor health and violence in more unequal societies is established, their research demonstrates that ‘almost all problems which are more common at the bottom of the social ladder are more common in more unequal societies’ (p. 28).

Wilkinson and Pickett’s study demonstrates that the negative impacts of inequality are not limited to the poor, but instead are borne by all of society, meaning that richer societies do not necessarily do better than poorer societies: ‘the prevalence of poor health and social problems in whole societies really is related to inequality rather than average living standards’ (p. 29). On the key issue of causality, the authors emphasise ‘the relationships between inequality and poor health and social problems are too strong to be attributable to chance’ (p. 150). Pointing to their study and numerous others they argue, ‘It is very difficult to see how the enormous variations which exist from one society to another in the level of problems associated with low social status can be explained without accepting that inequality is, in an essential respect, the common denominator, and a hugely damaging force’ (p. 155).

This is powerful and persuasive reading. Wilkinson and Pickett's study challenges proponents of ‘trickle down economics’, demonstrating that the benefits of economic policies privileging a few will not improve the lot of a society. The Spirit Level also speaks in support of ‘post growth’ and ‘degrowth’ movements, asserting that yes, we are rich enough and that more growth is not the solution, but rather, more equally distributing wealth. Conspicuously absent from the text is explicit reference to capitalism (with the exception of publication titles the term appears only once, in a quote by Murray Bookchin). A more explicit interrogation of the structural context in which inequality and its related social ills are generated (rather than the authors' traverses into psychology in explaining why inequality creates dysfunctional societies) would drive home the argument, however this remains an important and cogent study.
Posted by kelly at 3:33 AM 2 comments:

Labour Rights in the Electronics Industry

Case Studies of Workers' Struggles in Samsung Electronics and its Asian Suppliers.

The book is a great complement to the Bluestocking Institute's book, Lessons for Social Change in the Global Economy: Voices from the Field, which includes a chapter from AMRC's Sanjiv Pandita and Fahmi Panimbang.

Here's a description of the book from the AMRC website: 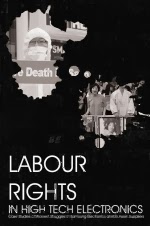 Labour Rights in the High Tech Electronics Industry describes the struggles of workers fighting for their basic rights in the electronics industry with a focus on the operations of Samsung Electronics and its Asian suppliers, including those in South Korea, Indonesia, India, Vietnam, Malaysia, Thailand and Taiwan. It also discusses the overall situation of the electrical appliance and electronics industries in Japan where workers have been hit hard by factories relocations.

This book is dedicated to all workers who have lost their lives in struggles for their rights, and to those who have suffered due to occupational diseases and industrial accidents in South Korea and many other places in Asia and beyond, and to victims who have died due to cancer from working in electronic factories. This book also salutes the survivors and their families, who struggle every day for justice.
You can download the book for free from the AMRC website.
Posted by Shae at 3:14 PM No comments:

Lessons for Change in the Global Economy: Voices from the Field

Our edited collection of chapters exploring approaches to creating change is now available for preorder. You can get a 30% discount if you preorder the book from Lexington: order directly online and enter the promotional code 'LEX30AUTH14' or download the order flyer.

In the face of globalization’s massive social and economic transformations and the resulting persistent inequality, activists, labor organizers, and advocacy NGOs are seeking and creating change beyond the confines of formal state politics and across national borders. Given the breadth of local issues activists face, the ways they define the problem and seek redress vary widely. This book provides a unique perspective on these efforts, gathering into one volume concrete examples of the implementation of different strategies for social change that highlight the challenges involved. This provides useful lessons for those involved in social change, as well as for those studying it. Contributors to the volume are scholars and practitioners around the world, and they draw on strong connections with people working in the field to improve working conditions and environmental standards of global production systems. This allows readers to develop a more comprehensive and grounded understanding of strategies for social change.

This book maintains a strong balance between breadth and specificity. It provides an overview of the themes of social change, which contextualizes and draws common threads from the chapters grounded in specific geographic locations and political spaces of change. The chapters analyze environmental and social problems and the varying degrees of success activists have had in regulating industries, containing environmental hazards, and/or harnessing aspects of an industry for positive social and economic change. Contributors draw upon different ways of creating change, which include corporate social responsibility schemes, fair trade regimes, and community radio. By providing insight into the potential and limitations of actions taken at different levels, the book encourages a critical perspective on efforts for social change, grounded in an understanding of how conditions around the world can affect these activities.
Order now: Amazon, Book Depository.
Posted by sky at 6:12 AM No comments:

Bluestocking's Annual Report 2012-2013 is now available.
Over the past financial year, we presented our second short course on Globalisation, began a Book and Film Club, and had our Lifecycles Book accepted for publication. This financial year aims to be just as busy, with a Writing Circle and a Featured Research Column planned. For more information please see the Annual Report file provided on our Facebook site -click here-.
Posted by Michelle at 11:33 PM No comments: